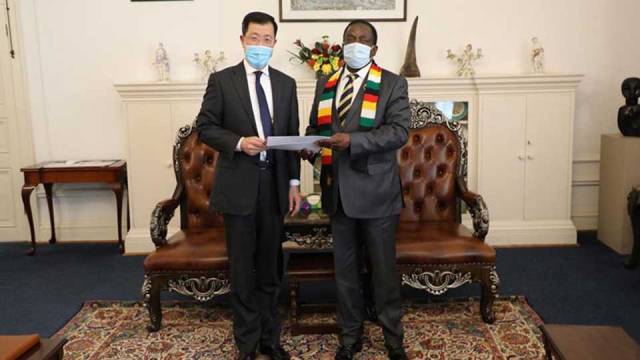 Zimbabwe was suspended from the Commonwealth for human rights violations related to the presidential elections and the ‘fast track’ land reform in 2002. In December 2003, Mugabe ended membership before the suspension could be extended. Mnangagwa expressed his wish to re-join the Commonwealth, hoping this would benefit the removal of US sanctions and EU measures.

When the Commonwealth Heads of Government Meeting took place in April 2018, Foreign Secretary Boris Johnson met his Zimbabwean counterpart at a side event. This led to a statement that the UK would support Zimbabwe’s re-entry to the Commonwealth in expectation that the government would deliver ‘the free and fair elections the people of Zimbabwe deserve’.

However, these prospects were soon dashed by the regime’s violent reaction to the protests following the elections in July 2018. In February 2019, UK’s Africa Minister Harriet Baldwin declared that her government would no longer support Zimbabwe’s readmission. Mnangagwa angrily riposted that such application was submitted to the Commonwealth Secretariat and not to the UK. In September 2019 he met with Patricia Scotland during the UN General Assembly meeting. Foreign Minister, Sibusiso Moyo, subsequently reached out to the Modi Government in India to back its re-entry, but no progress has yet eventuated.

The deterioration of Zimbabwe’s relations with the West had coincided with growing Chinese interest in the resources on the African continent for its own rapid industrialisation, as an investment opportunity and as a market for its manufactured goods. Zimbabwe’s growing isolation from the West offered a convenient entry point and China soon emerged as a reliable partner. However, China’s involvement was spurred less by solidarity than by self-interest.

Increasingly concerned about Mugabe’s indigenisation policy, Mnangagwa’s elevation to the presidency had received China’s blessing. Nonetheless, strains were soon to appear when it became increasingly apparent that Zimbabwe was unable to service its debts. What particularly rankled in Beijing was that Zimbabwe’s incapacity to pay its dues was deemed to be an outcome of the government’s misappropriation or misuse of Chinese funds.

It is increasingly evident that Mnangagwa’s hopes of re-orienting Zimbabwe’s foreign policy have failed. As under Mugabe, the government has displayed a contempt for human and civil rights, democracy and the rule of law. Its hopes that a more attractive business environment can be achieved without such ingredients has run foul of its repressive response to mounting economic and political crisis. Foreign policy remains locked in the recent times past: looking to regional solidarity, estranged from the West, and increasingly dependent upon China.