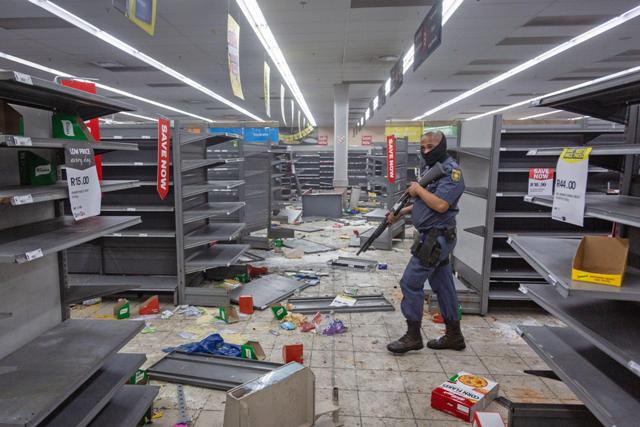 A police officer walks in a looted shop in Johannesburg, South Africa, on 12 July, 2021. [photo: Alamy]

The wave of violent protest, looting and arson that engulfed South Africa after the jailing of the former president Jacob Zuma was an attempt ‘to provoke a popular insurrection’, according to his successor, Cyril Ramaphosa. In a national address broadcast live on television on 16 July, the president said the unrest had been fomented as ‘a deliberate, co-ordinated and well-planned attack on our democracy’ but ruled out declaring a state of emergency.

With 25,000 troops and reservists deployed to help quell week-long riots, at least 212 people killed, main transport routes blocked, and shortages of basic goods and medicines prompting further looting, the scenes were described by Ramaphosa as the worst violence the country had faced since the end of apartheid.

More than 2,500 people were arrested as army reinforcements supported police struggling to impose order amid apocalyptic scenes across Gauteng and KwaZulu provinces, which include Johannesburg, Durban and Pretoria. Many of the victims were trampled to death during stampedes by looters, police said. In the vacuum left by overwhelmed security forces, groups of vigilantes took to the streets, despite warnings by ministers ‘not to take the law into your own hands’.

The rioting erupted after Zuma was imprisoned for failing to appear before an inquiry into corruption, the Zondo Commission, which is investigating allegations of ‘state capture’ during his 2009-18 presidency. The death toll was highest in KwaZulu-Natal, the home province of Zuma, 79, a former stalwart of the ruling African National Congress (ANC) now serving a 15-month sentence for contempt of court. In a parallel corruption case, he pleaded not guilty in June to charges of accepting more than 700 bribes while president, as well as racketeering, fraud, tax evasion and money-laundering, much of it linked to a $5bn arms deal in the 1990s.

Anger at the sentencing of the former freedom fighter, who has remained popular despite the allegations, degenerated into looting and arson, fuelled by deep resentment over the poverty and inequality that have remained entrenched during the 27 years since white-minority rule ended. Unemployment hit an unprecedented 32.5% as Covid-19 spread last year, with about 63% of youths jobless, while an extra 2 million people fell into poverty, according to the World Bank.

To the despair of black business owners, the looters had not spared their own neighbours: at least 100 shopping centres had been looted or destroyed, some 800 shops ransacked and an estimated 50,000 informal traders had lost their livelihoods, according to the South African Property Owners Association. The country’s main oil refinery and the world’s biggest coal terminal were forced to close, and exports through Durban were also badly hit. Early estimates suggest the economic losses could amount to 20bn rand ($1.4bn) but this does not account for the indirect costs to jobs and uninsured small businesses.

In an open letter to Ramaphosa on 14 July, Mondli Makhanya, Adriaan Basson and Stephanie Saville, editors of City Press, News24 and the Witness respectively, said: ‘It is now abundantly clear that this violence, that your government cannot seem to stop, was instigated by intelligence officials and other politicians or civil servants loyal to Zuma.’ The three called for a state of emergency to be declared ‘while Zuma’s children, sycophants, spies and loyalists are allowed to continue fanning the flames of violence on social media and mobilising desperate people to destroy our country.’

One of those identified as a prime suspect for fomenting the unrest is Thulani Dlomo, a former head of the State Security Agency’s special operations unit often described as Zuma’s ‘private spy’. He denied the allegations, calling them ‘a smokescreen’ to ‘deflect legitimate concerns’ about Zuma’s arrest.[16] He also criticised the media using photographs of him in traditional Zulu dress as an attempt to support ‘propaganda’ around the idea of the riots being ‘ethnic mobilisation’. Another prominent ally of Zuma alleged to have played a role in instigating the unrest is Ace Magashule, who was suspended as secretary-general of the ANC in May. He had been charged over an allegedly fraudulent $18m asbestos contract while premier of the Free State province government but had refused to step down as head of the ruling party. Like Zuma, Magashule has been implicated in allegations of ‘state capture’ by the powerful Gupta family. All deny any wrongdoing. As KwaZulu and Gauteng erupted, Magashule had backed the #FreeJacobZuma campaign, though he condemned the looting and destruction of property.

The former BBC journalist Martin Plaut said: ‘It seems pretty clear now that a group associated with Jacob Zuma and Ace Magashule nearly succeeded in mounting a coup against President Cyril Ramaphosa.’ If these claims are borne out, there will be many who will say this was an eminently foreseeable explosion of anger, rooted in the corruption that had enveloped the ANC in the past two decades and exploited by the faction under Zuma who were prepared to use any means to maintain their power and avoid prosecution. In 2019, William Gumede, a professor at Wits University, warned of the threat to the ANC from ‘the appalling corruption, mismanagement and populist exploitation of black grievances to hold on to power, led by the former president Jacob Zuma’.

Ramaphosa’s struggle to get a proper grip on the ANC, and his failure to purge it of its now-endemic corruption, has cost the country dear. In May 2020, as the coronavirus pandemic took hold, Gumede wrote: ‘Once corruption penetrates the [R500bn/$35bn] Covid-19 funding, it is likely that government’s credibility will be destroyed, raising the spectre of angry, hungry and disappointed would-be recipients resorting to public protests, looting and violence.’